Montague Kobbé was born in Caracas, Venezuela, and has resided in the UK, Germany, and Spain. He has had close ties to Anguilla for over thirty years and maintains a regular literary column in Sint Maarten’s Daily Herald. His work has been published in the New York Times and El Nacional (Venezuela) among many other media outlets. He is the author of The Night of the Rambler (a finalist for the Premio Literario Casa de las Américas) and Tales of Bed Sheets and Departure Lounges. He currently lives in London. On the Way Back is his latest novel. 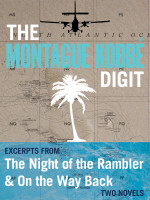 The Montague Kobbé Digit comprises excerpts from The Night of the Rambler and On the Way Back, two stunning literary achievements set in Anguilla by one of the freshest new voices in world literature.

The Night of the Rambler

A gorgeously written and highly entertaining debut novel about a small island’s struggle for independence from Britain.

On the Way Back

Kobbé’s hilarious social novel centers on a comically failed business venture on the island of Anguilla, brilliantly echoing A Confederacy of Dunces and Herman Wouk’s Don’t Stop the Carnival.