OWEN BROZMAN is the illustrator of the New York Times best seller You Have to Fucking Eat, Kindness & Salt, and the acclaimed graphic novel Nature of the Beast. He has illustrated for National Geographic, Entertainment Weekly, Time Out New York, Ninja Tune, Scholastic, and numerous other clients. His work has been recognized by 3×3 magazine, the Society of Illustrators of Los Angeles, Creative Quarterly, and many more. He lives and works in Brooklyn, New York. Fuck, Now There Are Two of You is his latest book. 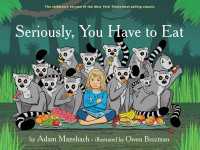 Seriously, You Have to Eat

The 100% kid-friendly, G-rated version of the New York Times best-selling parents’ book, You Have to F**king Eat. You Have to Fucking Eat

The long-awaited sequel to the #1 New York Times best-selling classic Go the Fuck to Sleep.