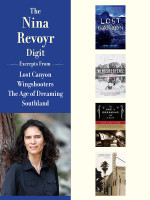 The Age of Dreaming by Nina Revoyr is available for only $2.99 wherever e-books are sold for the month of August. Click for details on this e-book sale, along with details on a print sale as well as our special Nina Revoyr Digit, featuring excerpts from all four of Nina Revoyr’s Akashic titles.